What is Frosted Window Film?

Frosted glass is produced by the sandblasting or acid etching of clear sheet glass. This creates a pitted surface on one side of the glass pane and has the effect of rendering the glass translucent by scattering the light which passes through, thus blurring images while still transmitting light. Frosted glass has either an internal texture or a frost inner layer that has been created on the glass permanently. Unlike frosted window film, frosted glass is more durable, but it’s also permanent and can’t be reversed. 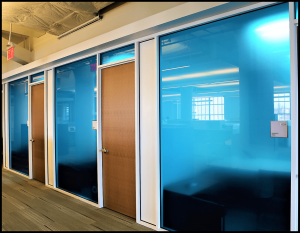 Frosted window film can be done in many colors, not just traditional white!

The most obvious benefit of frosted window film is privacy. Frosted film filters out light in order to keep your home and office private from outside views. It also helps reduce glare on computer screens which can cause eye strain. As an added bonus, frosting your windows will give you an open, decorative new look without having to install curtains or blinds. Here are other benefits of frosted window film:

Frosted window film is a great way to give your Virginia home or office a decorative touch at the fraction of the cost of frosted glass. If you are a Virginia area resident or business, get in touch with our team of professional window film installers for a free estimate. We proudly serve the Charlottesville VA area as well as Richmond VA.